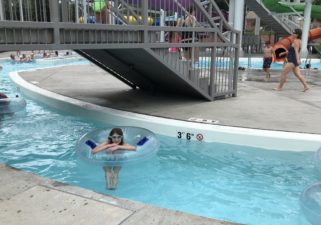 My kids and I were looking for a new place swim during the oppressive July heat. At 9 and almost 13, my kids have a tendency to get bored at a basic pool. I found River Run New Albany Family Waterpark in our pool directory and decided to do a bit more research. The park map on River Run’s website helped me make the decision. It showed different park features that sounded enticing, plus a reasonably-priced snack bar which is oh so important if you have a boy around my son’s age! 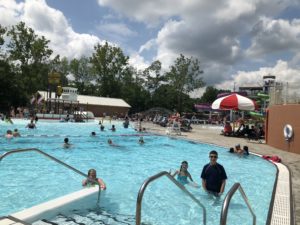 We arrived around noon, and though there was a good sized crowd, we were able to find a few chairs together beside the activity pool. This pool starts at 3ft deep and graduates to 5ft. This was a nice area for us to hang out as a family. Deep enough for me to get a little exercise while the kids jumped in from the side and played. On the other side of the rope, the pool gets gradually more shallow and leads to a play area for younger kids, including a ship with water features and a small slide.

On the other side of the park, there is a lazy river. The required single and double inner tubes are provided and were all well inflated. The lazy river is a nice place to relax and just go with the flow. 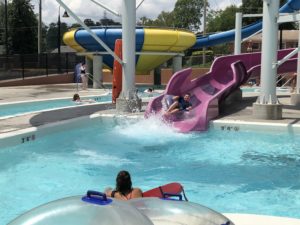 Just inside of the river, there are 4 water slides. One open slide (inner tube required), two body slides and a bowl slide for those who are daring. We did not attempt the bowl slide, but we watched others dropping down into the pool upside down as they excited the slide!

After spending some time in all of the different areas, we decided to take a break on the upper deck for lunch. The concession stand offers basic fare reasonable price. We ordered a burger meal, nachos, apple sauce, a walking taco and drinks and only spent about $16. The service was quick and there were there were multiple tables available. I like that the restrooms are located near the dining area. The women’s restroom was clean and well stocked. There were showers stalls as well. My son said the men’s restroom was clean but it was out of soap, so I was glad I had hand sanitizer in my bag. 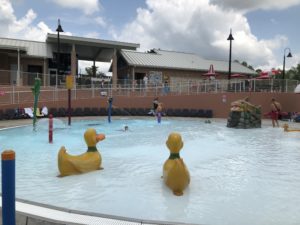 On our way back down to the pool we walked past the toddler splash area and pool. It was really cute with multiple spray features and a small slide. The toddler pool maxes out at a depth of 2ft. There were multiple chairs along side of it and a lifeguard in the water at all times. We saw lots of moms and dad enjoying the area with their little ones, but I waited until they had left to snap a photo.

One thing I appreciated about this park is the attentiveness of the lifeguards. There were several on duty in each area and they rotated often to stay alert and refreshed. I noticed them correcting children for running on the pool deck and rough housing in the water. I also observed them springing into action twice to help a child who seemed to be struggling in the water. Another thing I noticed was the cleanliness of the waterpark. Guests are not allowed to bring in outside food and drinks, and the concessions are on the upper deck. These measured helped to keep the pool area nice and tidy.

River Run New Albany Family Waterpark is owned an operated by New Albany Parks and Recreation. Because of it is a municipal facility, admission rates vary based where you live and pay taxes. For Floyd County residents, admission is only $7 per person. For other Indiana residents the cost is $9 per person and for out of state residents admission is $15 per person. Annual passes are also available at varying rates. River Run also offers group rates, swimming lessons, birthday parties and exercise classes and the prices seem very reasonable. Though you can’t bring in your own food and drinks, hand stamps are available for reentry and there are picnic tables in the grassy area outside of the park, so you can easily just leave your lunch in a cooler in the car, eat at a picnic table and come back in, if desired.

Be sure to follow River Run New Albany Family Waterpark on Facebook to keep up with the latest news and events.