Loveland Ohio is about two hours northeast of Louisville, just outside of Cincinnati. 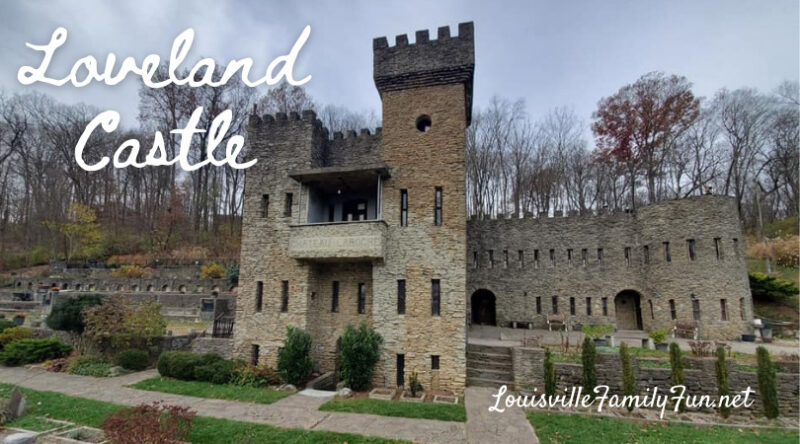 My kids and I recently took a trip up to the Loveland area to visit some area parks and Loveland Castle.

Loveland Castle, otherwise known as Chateau Laroche (“Rock Castle” in French) is a real castle built by a World War I veteran named Harry D. Andrews. Mr. Andrews started work on Loveland Castle in the 1920’s and continued working on it until his death in 1981. Upon his death, Mr. Andrews left the castle to his boy scout troop who still run it and maintain it to this day. 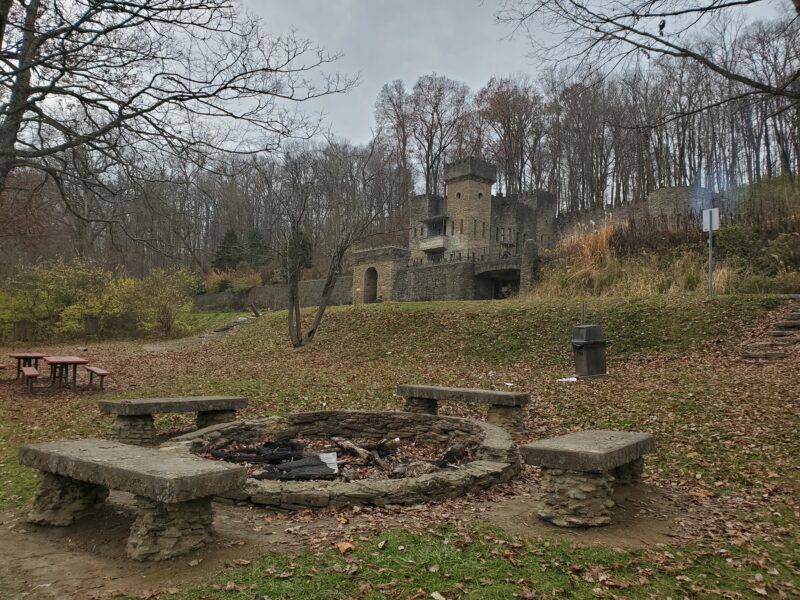 Harry D. Andrews has as interesting a history as the castle itself. Mr. Andrews was drafted as a military nurse in World War I. While stationed in New Jersey, Mr. Andrews contracted Spinal Meningitis. They thought he had died, notified his parents of his passing, and left his body in the morgue. However, after four days awaiting autopsy, it was discovered

Mr. Andrews was still alive! With Spinal Meningitis and the Spanish Flu everywhere, they put Mr. Andrew’s body in quarantine, expecting him to be dead within 30 days. After 30 days, he was alive and well, with absolutely not a sign of sickness. Mr. Andrews was thought to have special antibodies, so the doctors at the military camp used his blood to help treat other soldiers for months. 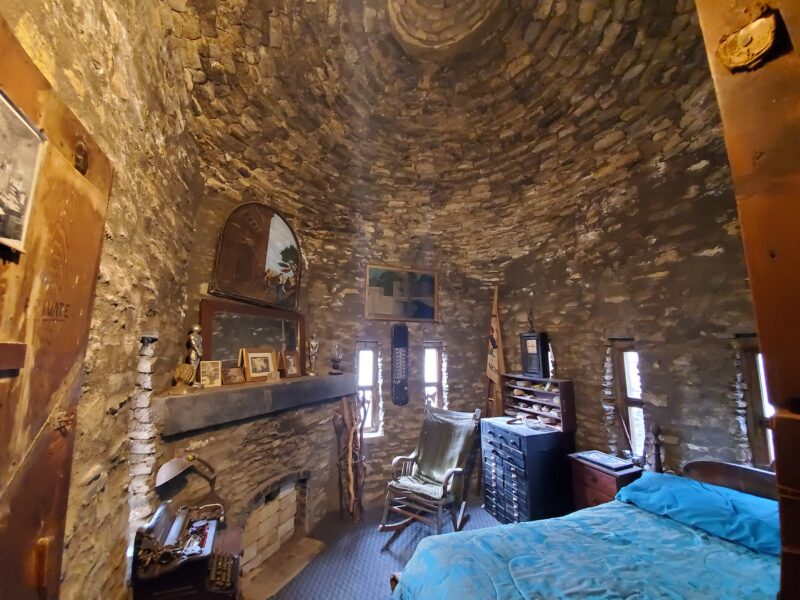 Mr. Andrews was then stationed in France. Once he got to France, Mr. Andrews was then permitted to send word to his parents that he was alive and stationed in Europe. Unfortunately, it had been six months since his family and friends had heard of his supposed death. In that time, his fiancé had married his best friend. It is said that Mr. Andrews received 50 proposals of marriage over his lifetime, but never accepted one due to his broken heart. 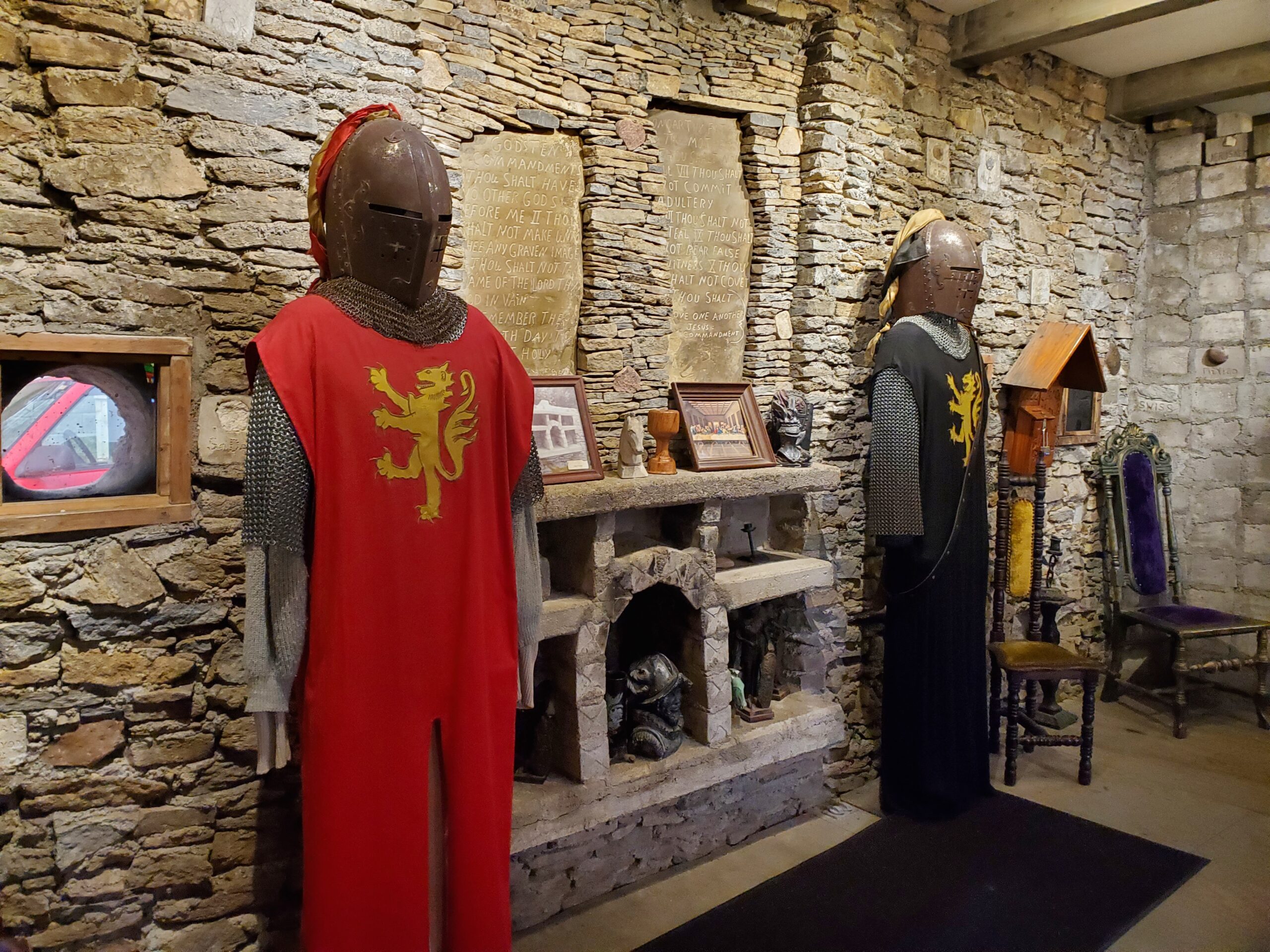 Mr. Andrews finished his time in Europe, graduated from Colgate University, had an I.Q. of 189, spoke seven different languages, and published books. While he was a teacher and principal by profession, Mr. Andrews’ hobbies included teaching Sunday School and leading a boy scout troop called the Knights of the Golden Trail (KOGT). It was for the KOGT that Mr. Andrews built Loveland Castle. 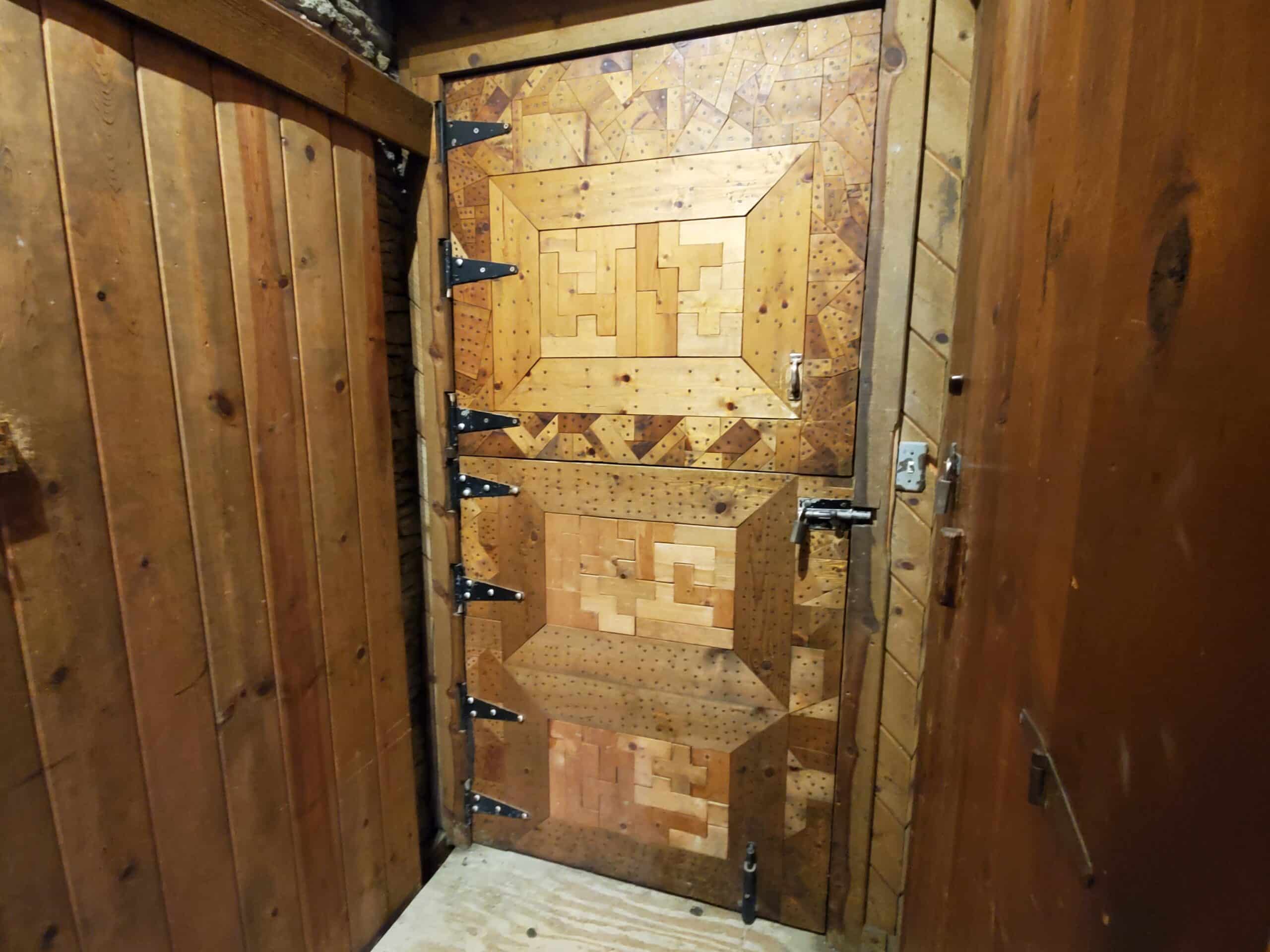 While in Europe, Mr. Andrews was influenced by different types of architecture and castles. Loveland Castle demonstrates German, French, and English architecture. Loveland Castle also has four types of towers, a domed ceiling architects said was impossible, a dry-moat, murder holes, stoop doors, 3-layered handmade doors with over 2,500 nails, and the castle grounds had a secret room even the KOGT didn’t know about until after Mr. Andrews’ death. 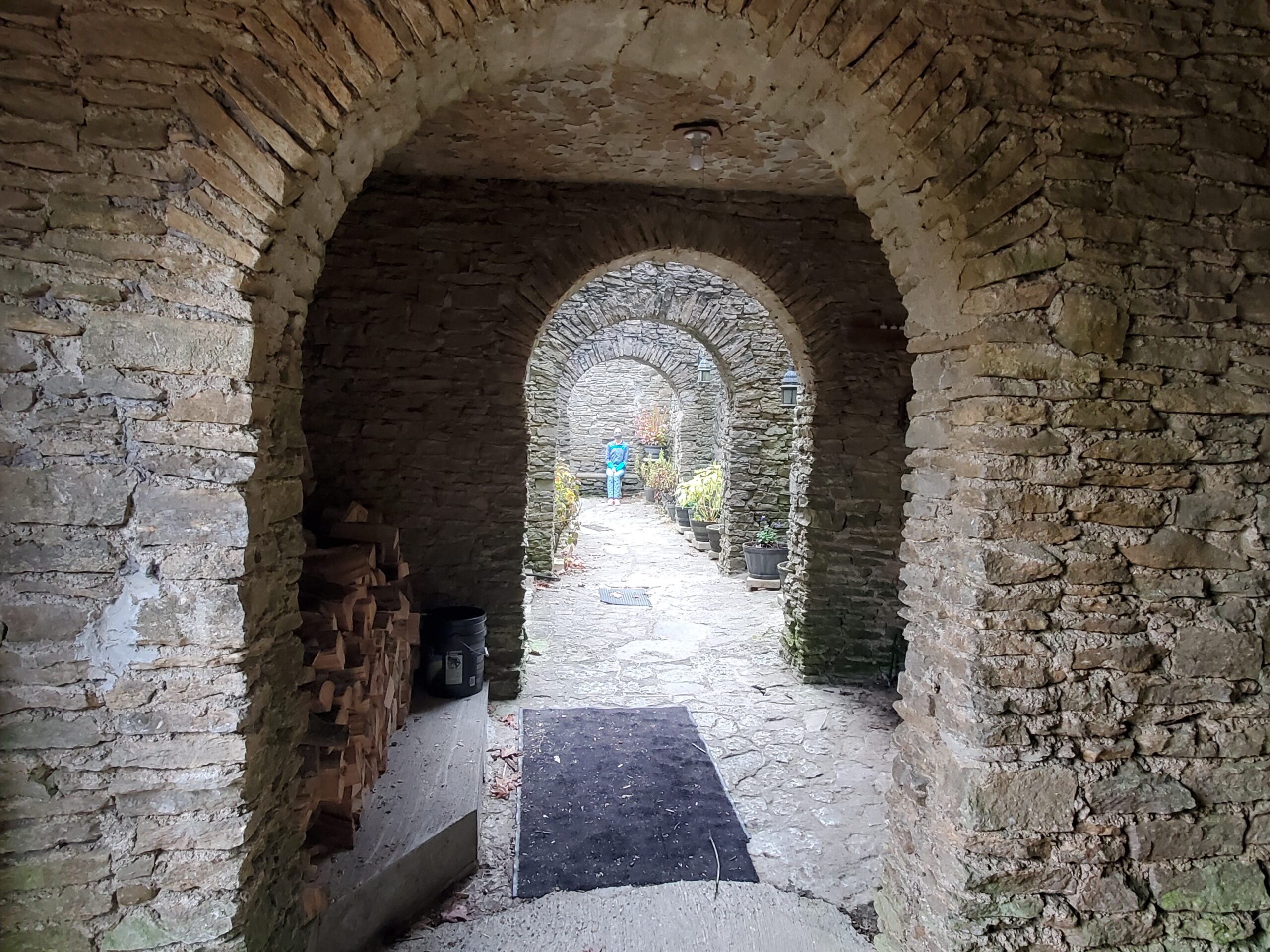 Mr. Andrews, with a little help from the KOGT, hauled up all the stones for the castle from the Little Miami River. He built the road to the castle, and the gardens. Mr. Andrews originally made vegetable hotbeds heated by railroad lanterns. Today, there are two botanists in the KOGT who work on the gardens. Every third Saturday, they take any outside volunteers to help maintain the garden. Feel free to contact them about helping during your visit! 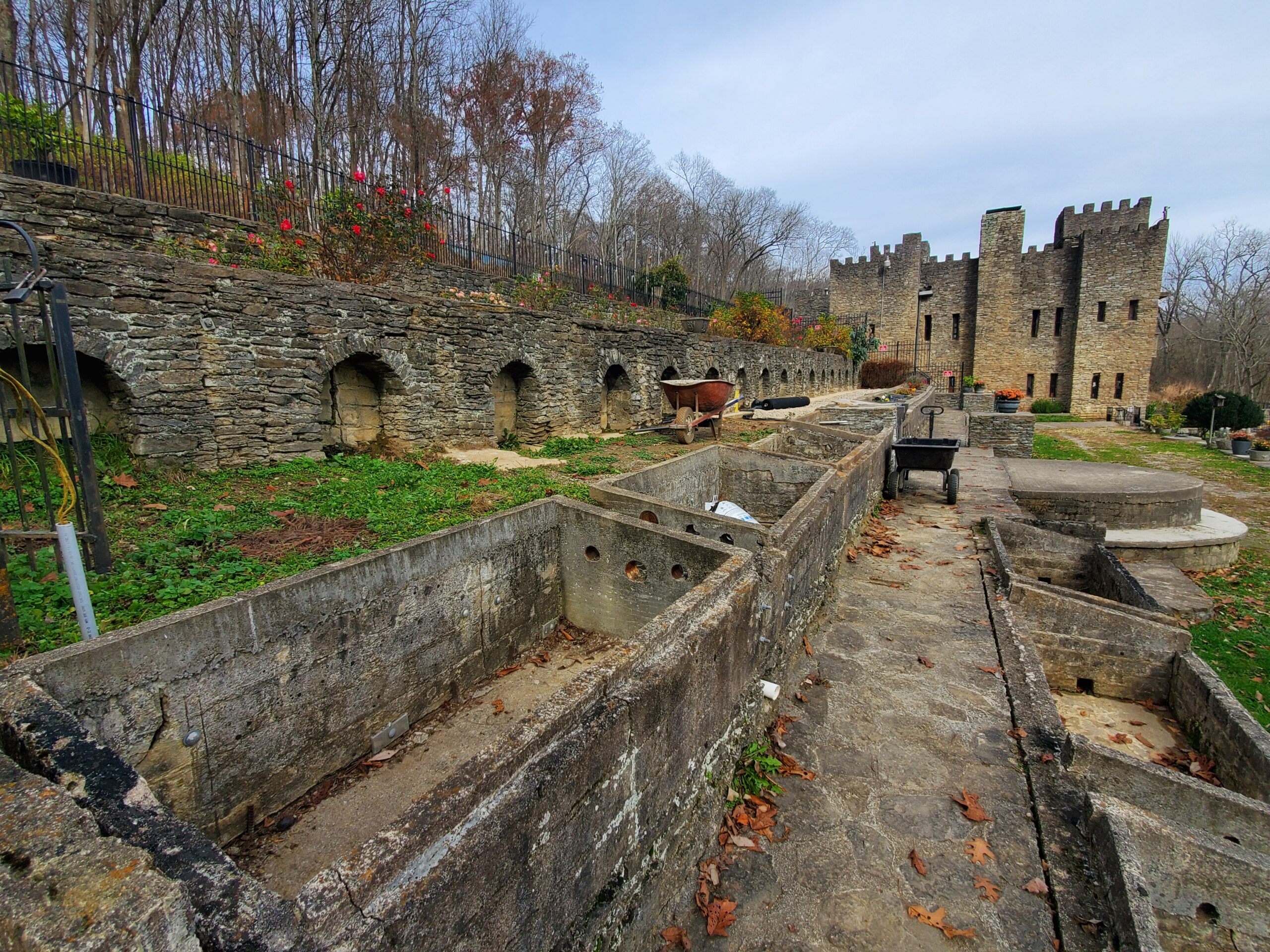 There are a couple of knights on duty every day at Loveland Castle. I highly recommend speaking to them. When we were there, the knights enjoyed telling us stories of how the castle was built, interesting tidbits about Mr. Andrews, information on the secret room, and ghost stories. In the game room, there are tons of framed photographs, and there is a story that goes with each picture. 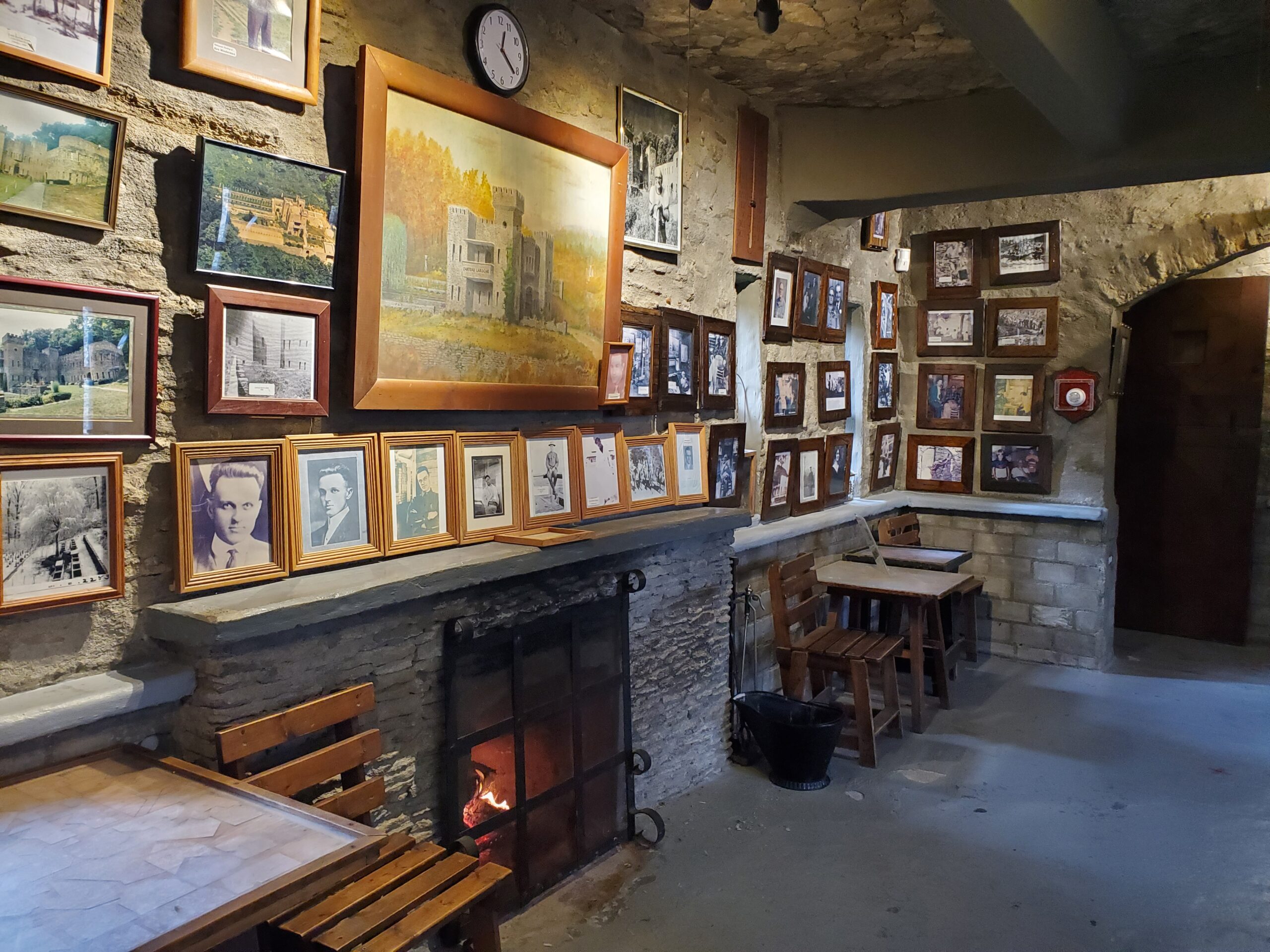 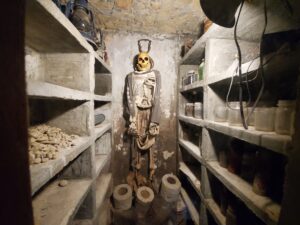 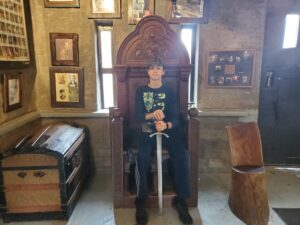 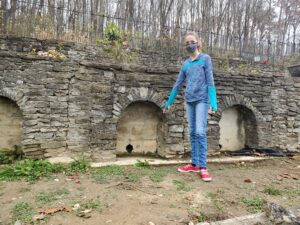 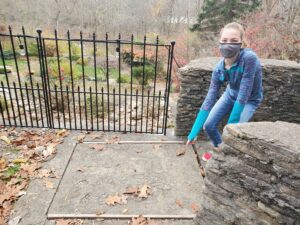 After we spoke to the knights, toured the castle, watched the video on Harry D. Andrews, walked through the garden, looked at the museum artifacts, and visited the gift shop, we went down to the Little Miami Riverbank. My kids had a great time exploring the waterfront and looking for the bald eagle that lives there. 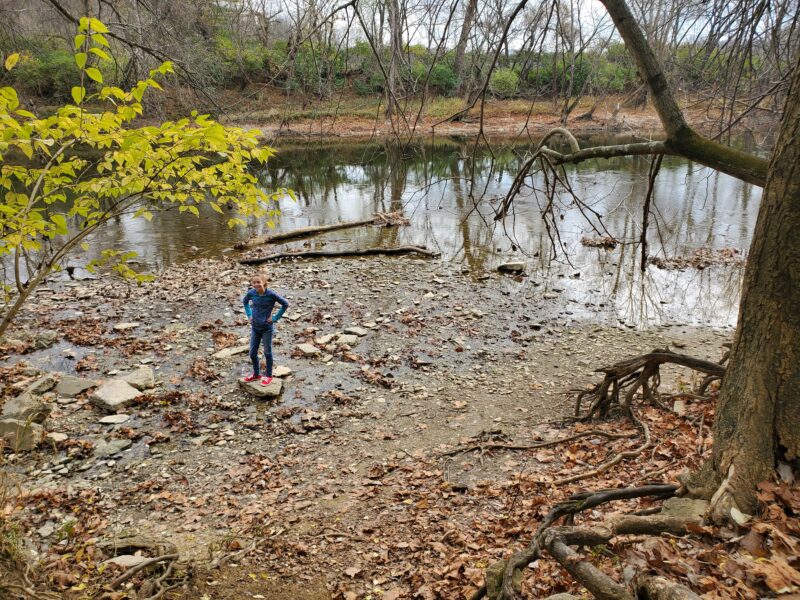 Just some side notes: 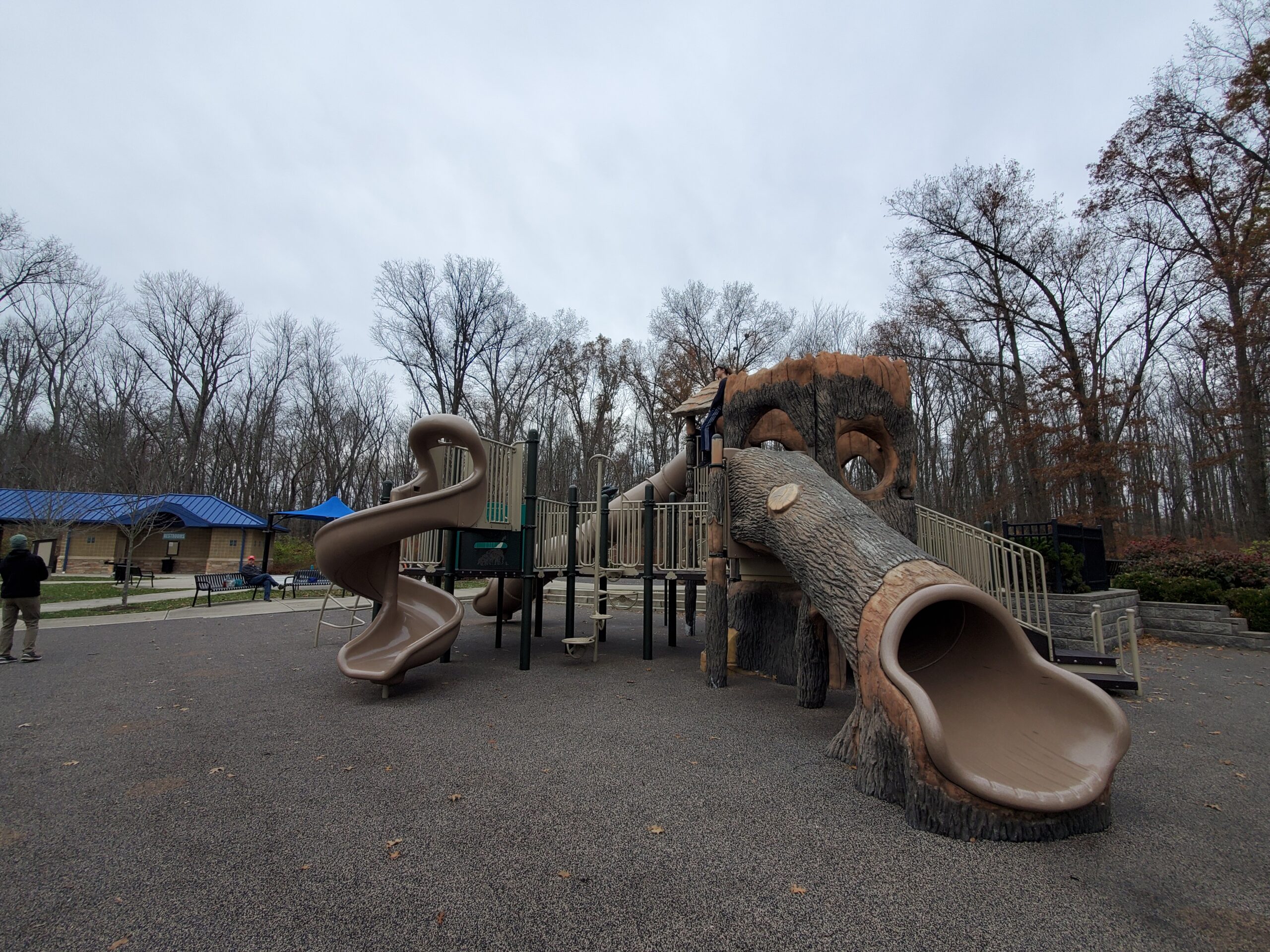 While in the Loveland area, we also went to two nearby parks with playgrounds: Home of the Brave Park and Beckett Park Boundless Park.

My kids loved the high climbing structures and tree themed slide at Home of the Brave. They’d like to go back for the splash pad. My kids also loved the farm theme at Beckett Park, and the big, open field where we watched the deer eat. (Side note – both parks have great bathroom facilities). 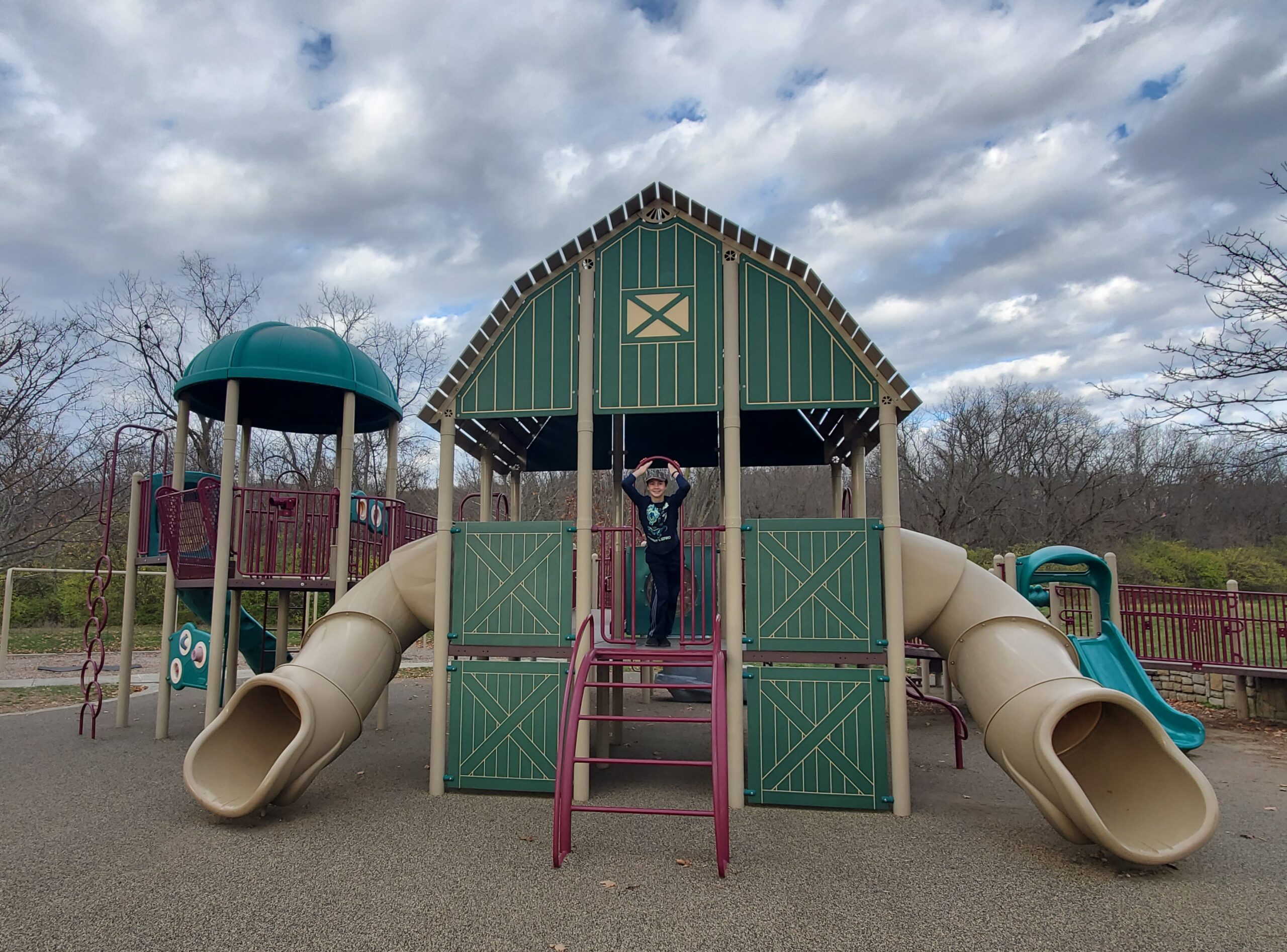 The last park of our visit was Trammel Fossil Park. Trammel Fossil Park is a 10 acre park where schools and avid fossil hunters can come and explore. There are very few places to dig for fossils in the Cincinnati area that are safe and accessible.

Since the plot of Trammel Fossil Park has never been disturbed, there are a lot of fossils in very good condition. Anyone who visits can dig for fossils and keep what they find. Recommendation – bring a spade, a plastic bag, and some water to help you find some good fossils. 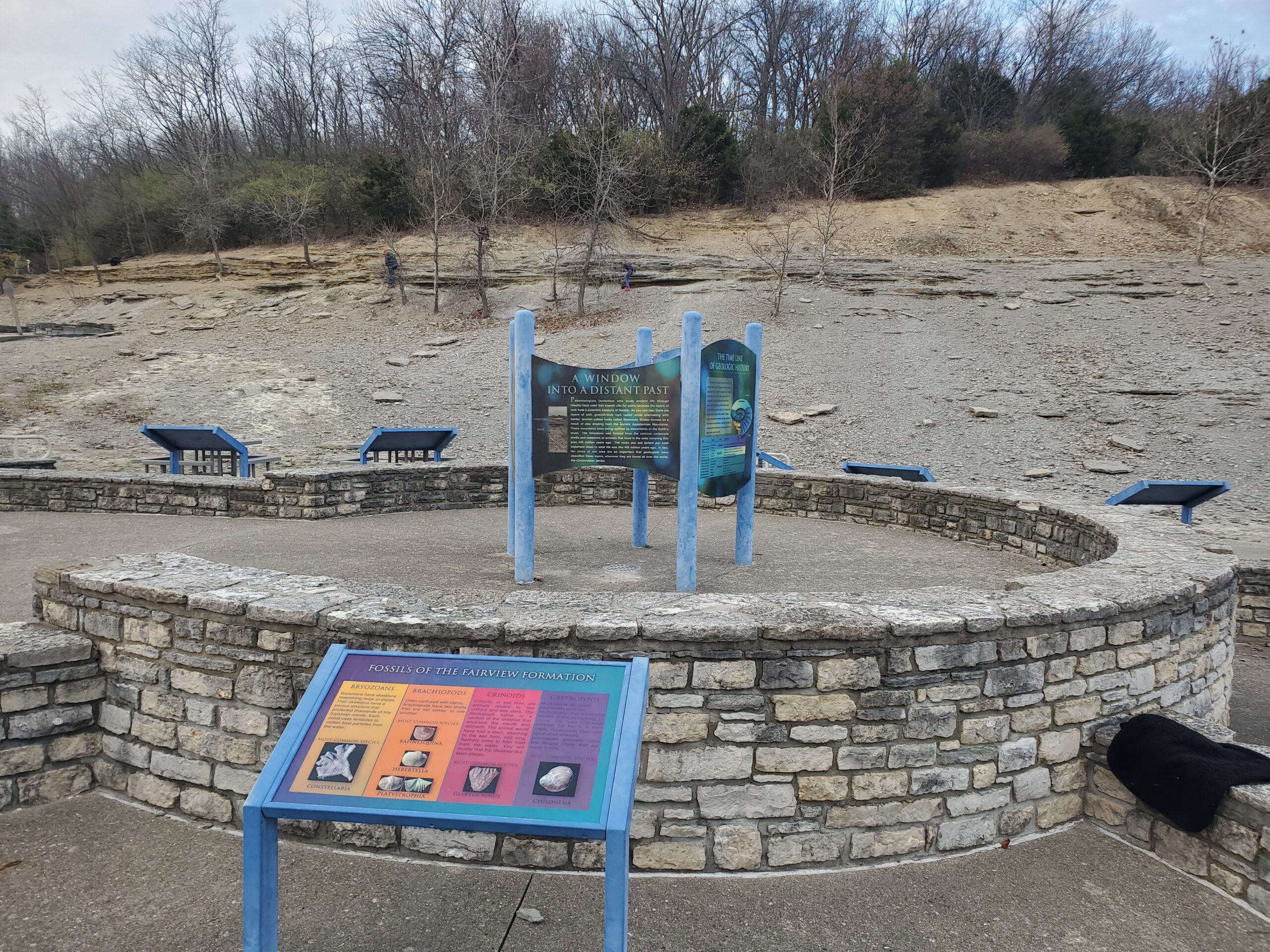 While out that way, we also stopped by Jungle Jim’s International Market. If you have never been, this is a unique store with more than just groceries. It’s an experience. 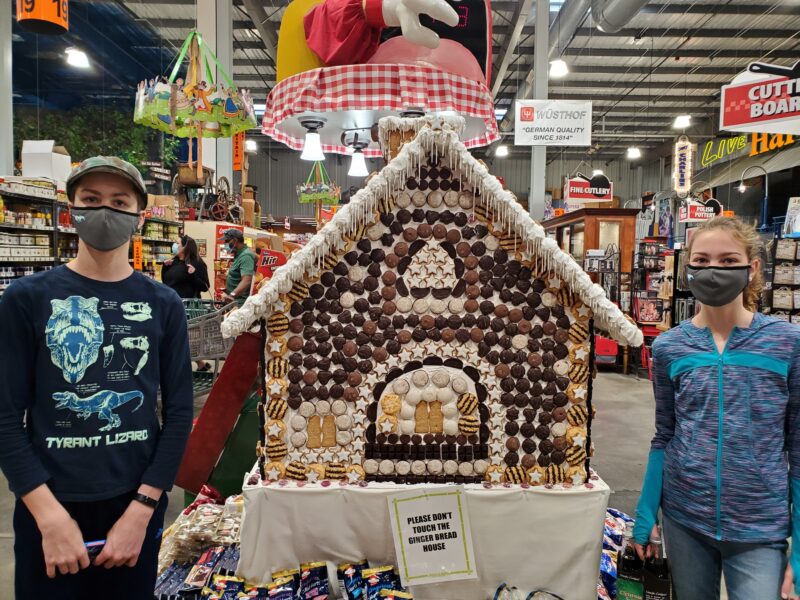 They do have food, snacks and drinks from almost every area of the globe. They also have amazing displays that talk and move. Just to give you an idea of the size of this store, they have a large, full sized yacht for decoration in the seafood department. 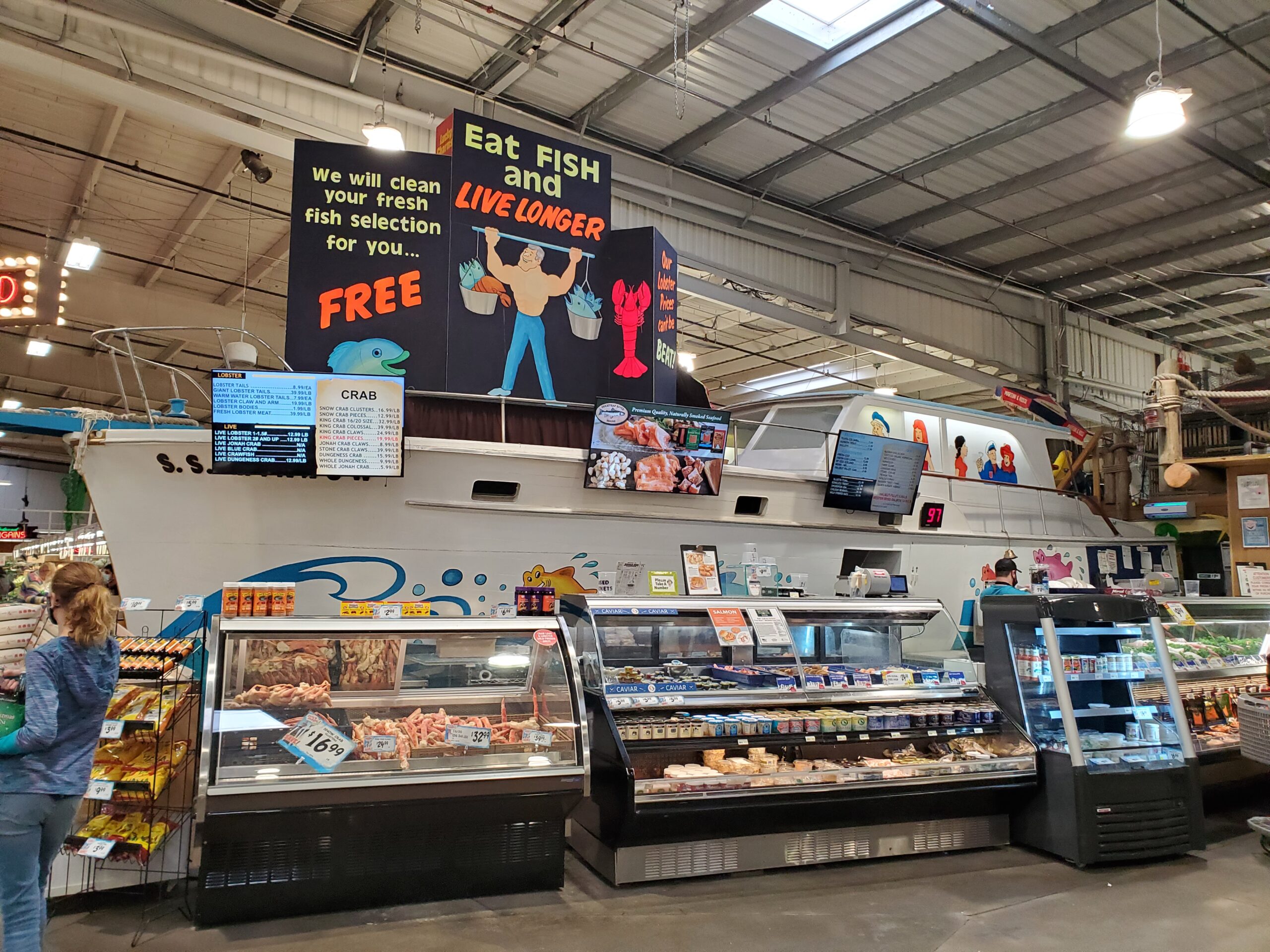 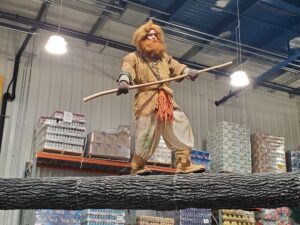 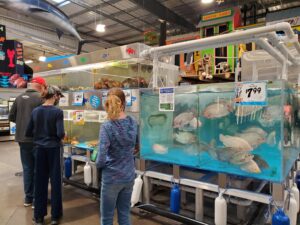 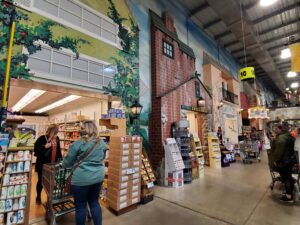 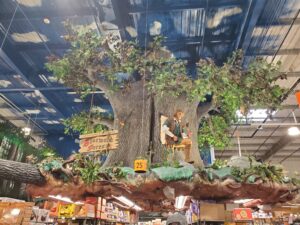 My other favorite big store nearby Loveland, Ohio is Ikea. Always a fun stop!

We also would like to make a separate trip back to visit Krohn Conservatory which has several houses of different plants and a special holiday program for the 2020 holiday season. 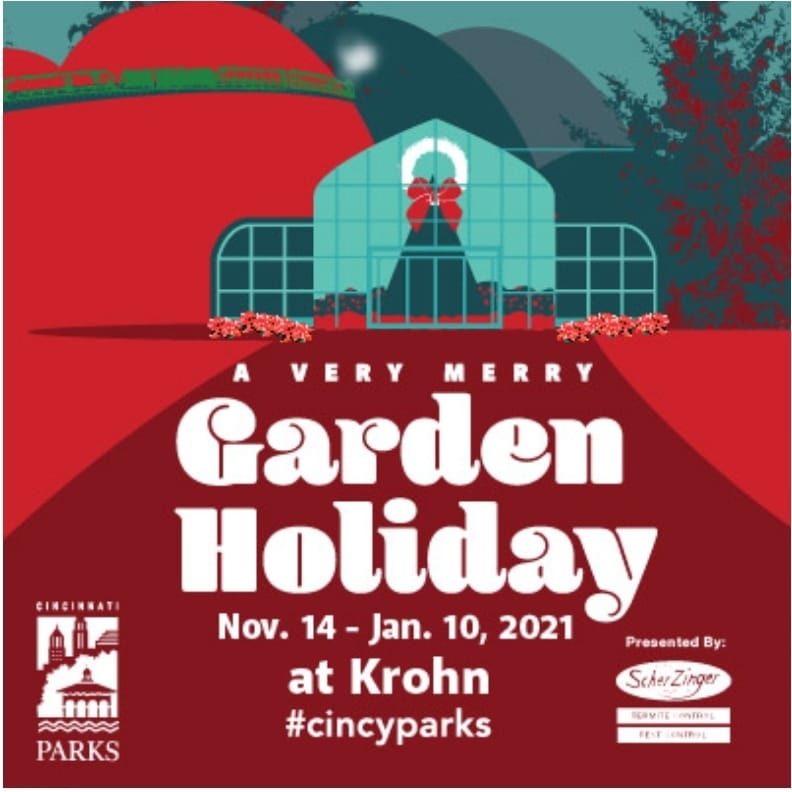 We want to come back and visit Heritage Village Museum. Heritage Village is a place that lets you experience life in the 1800s. There is a limited week day schedule from October through April, and a little more availability from May through September.

We also would have liked to have also visited the following parks in the Loveland area but ran out of time: 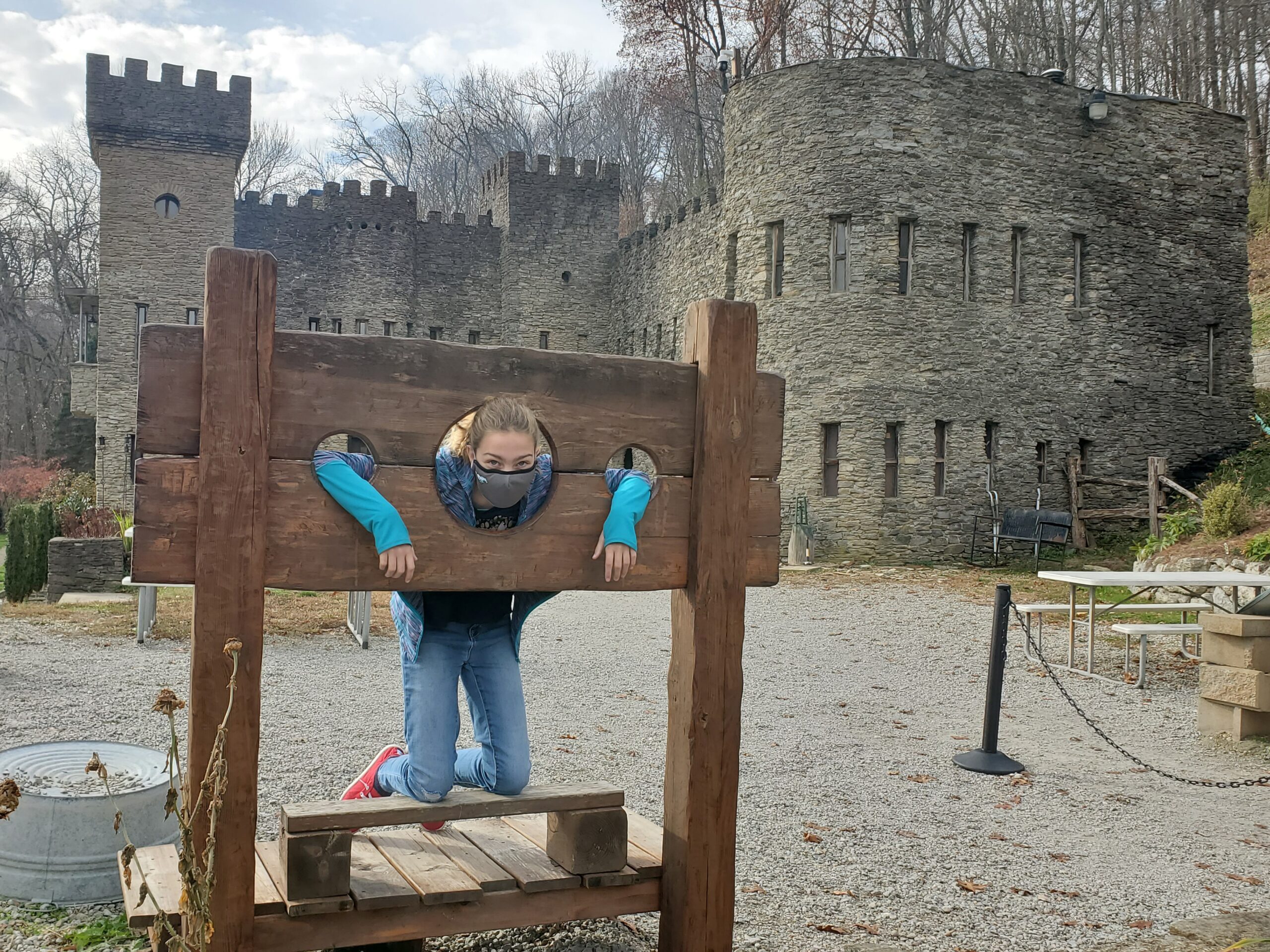 Looking forward to being back again soon!