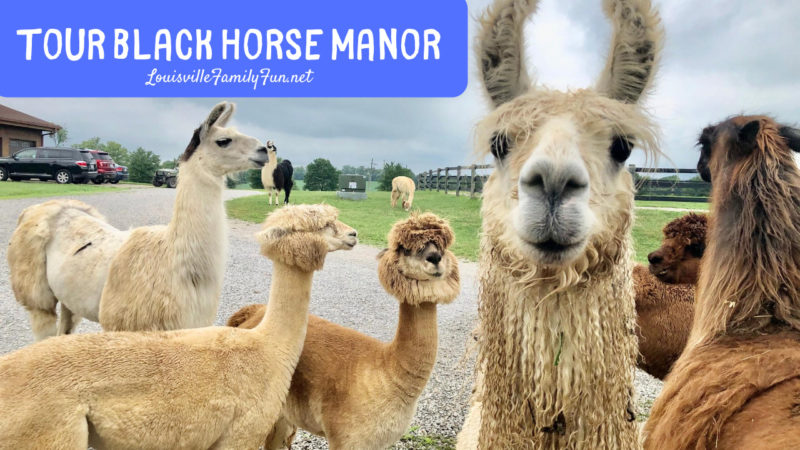 Alpacas, horses, donkeys, and other farm animals will greet you on this farm tour near Louisville.

On the edge of Shelby County and available for a farm tour near Louisville, you will find Black Horse Manor. Luckily, someone visit it recently and reached out to us to make the connection. We were invited out to take a tour and we will be back. This was excellent for animal encounters near Louisville.

The primary focus of Black Horse Manor is the horses. Jannie Giles runs the operation and is an incredible source of information. On any variation of a tour of this farm you will learn so much from her. Also, Jannie is really great with families and making the experience interactive. 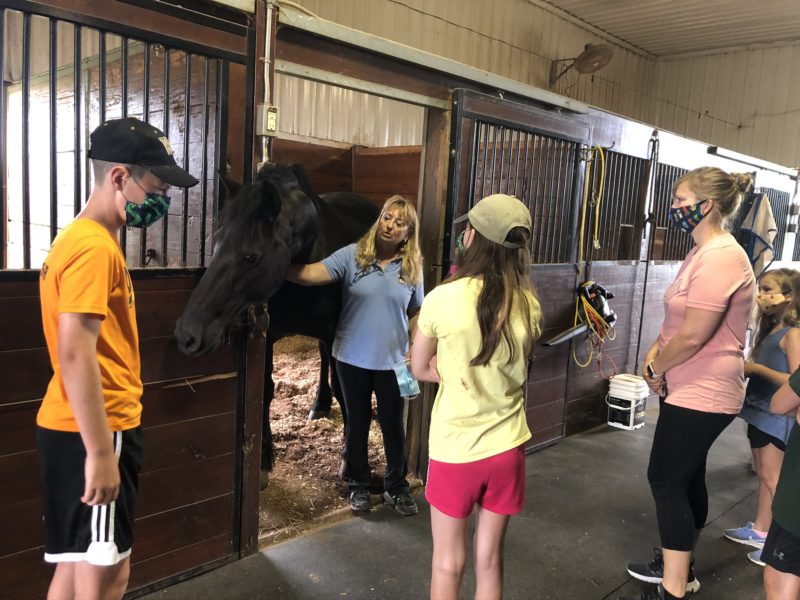 We arrived at 10:30am for our tour and Jannie was waiting to open the gate to let us in. The drive from Louisville to Black Horse Manor was abut 45 minutes and really scenic, we took some back roads instead of mostly highway out to Shelby County. The alpacas and llamas were right along the fence to greet us. 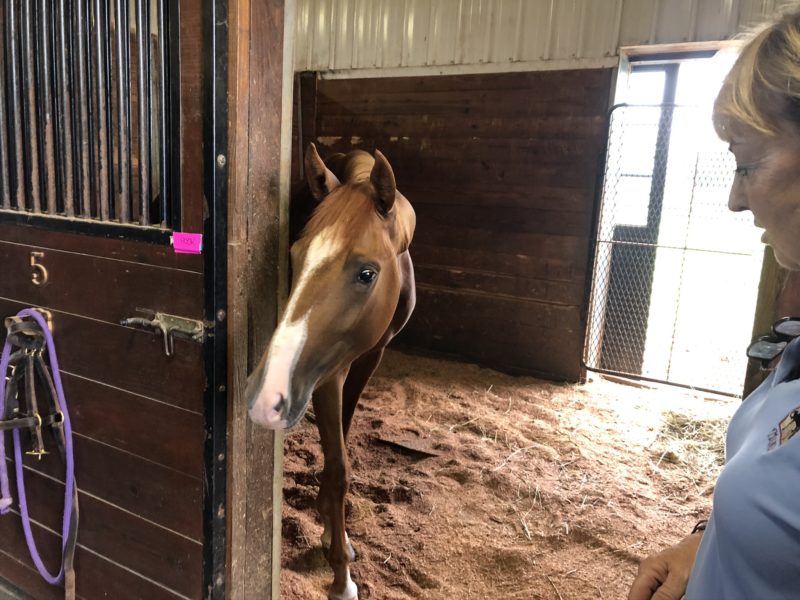 First, for our farm tour near Louisville, Jannie took us to the barn to meet the horses. But, before we entered she introduced us to some of the dogs that were intent on meeting us. The kids loved the dogs! In the barn, Jannie opened several stalls to tell us about the horses and allowed us to pet them and get close.

One of the horses, Cedar, was in a recent Tanya Tucker video! Jannie shared such interesting stories about the animals.

After meeting the horses in the barn, we went off to a secondary barn. To our delight, we were introduced to a young colt and his mother. That young colt was feisty! While we were there, Jannie gave the colt some medicine and it nursed.

I couldn’t believe all that we got to learn and experience on this farm tour near Louisville. I have never been so close to a young horse, animal encounters near Louisville don’t get much better than this. 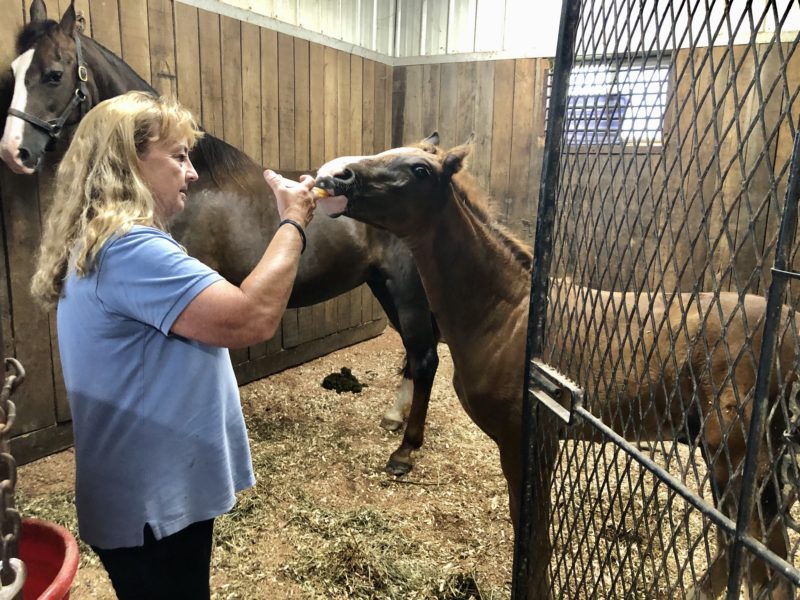 Outside the barn there were two horses in the field. Jannie told us the story of each animal, she has saved many animals and gave them homes on her farm. She trains the animals to have purpose and you can tell she cares for them so deeply.

We walked up the drive and the dogs joined us once again. Jannie mentioned that the dogs help keep the coyotes away at night so they are an integral part of making the farm function well. We noticed they also liked to play fetch! 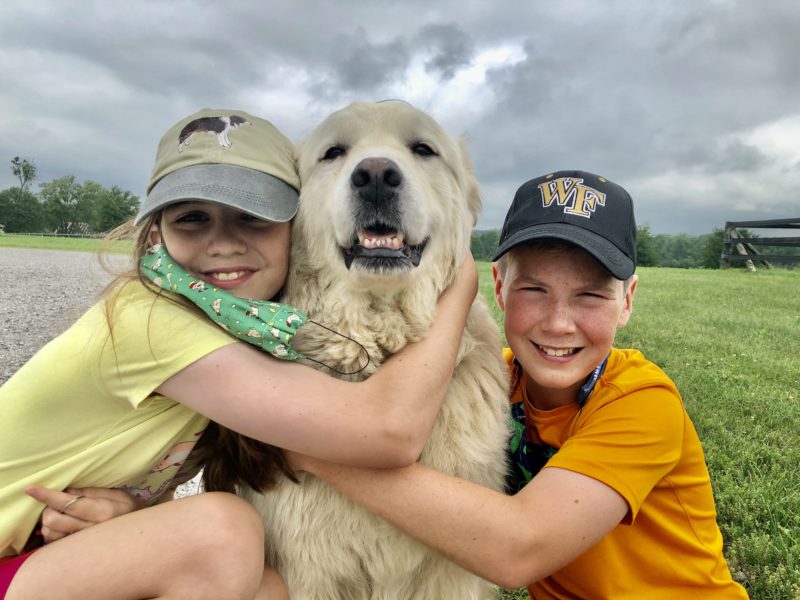 Next, we met the donkeys. The donkeys didn’t want to say hello. However, Jannie got a bucket of feed and the donkeys eagerly became our friends. The kids were able to feed the donkeys and pet them. 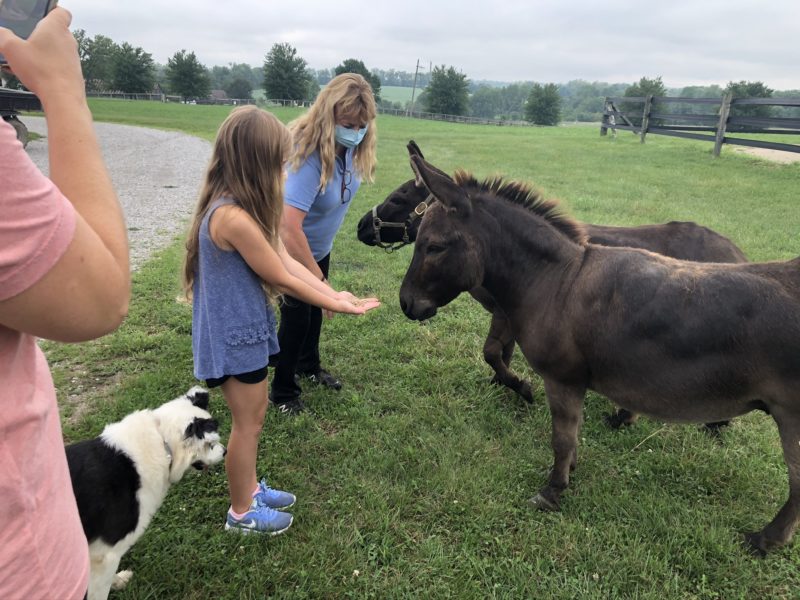 We took the bucket of feed and headed toward the entrance where the alpacas and llamas were in a pack. At first, the animals were hesitant to come to us. But, once a few of them ventured out way, they all came to us.

The kids fed them, petted them, and we all got so many laughs out of taking selfies with them. While we enjoyed the animals, Jannie taught us all about them and their stories. 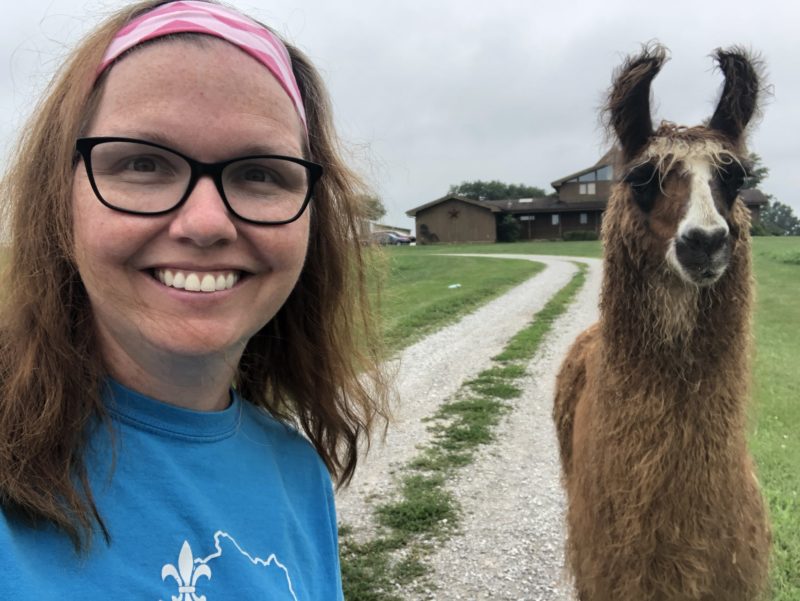 With the alpacas and llamas, this is where you come in. Since the primary source of business is from the horses, Jannie uses funds from tours to help cover the expenses of taking care of the alpacas and llamas. Be sure to check out the tour information below. Your fun helps her help these animals! 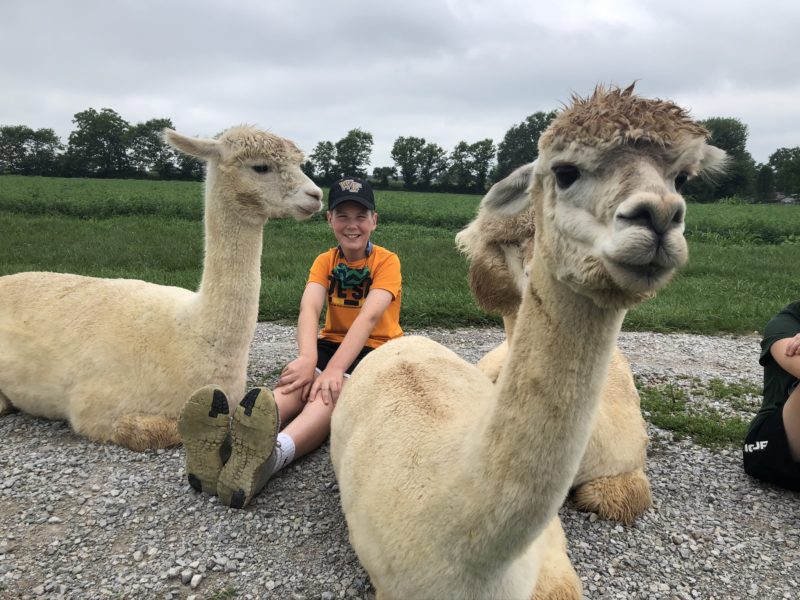 Want to know something else about this farm tour near Louisville? We met the famous alpacas! Why are they famous? Well, for the 2019 Alpaca Derby of course! NBC came to Black Horse Manor for this super fun video. 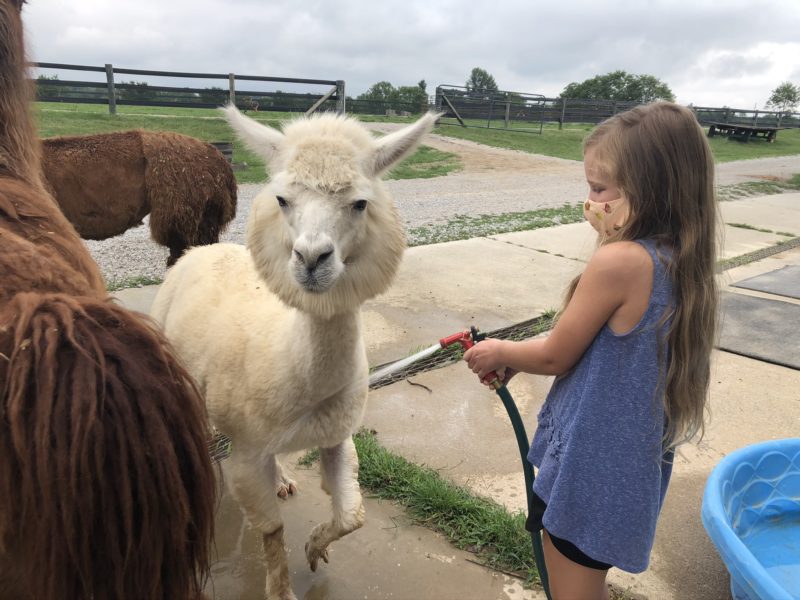 Next, we headed back to the barn to wrap things up. But, Jannie had more surprises in store. And, I don’t think we got special treatment. Jannie does special things for all of the families that tour. The kids got to hose down the alpacas and llamas for their morning bath and she introduced us to a baby llama that was just 1 month old. It was so soft!! 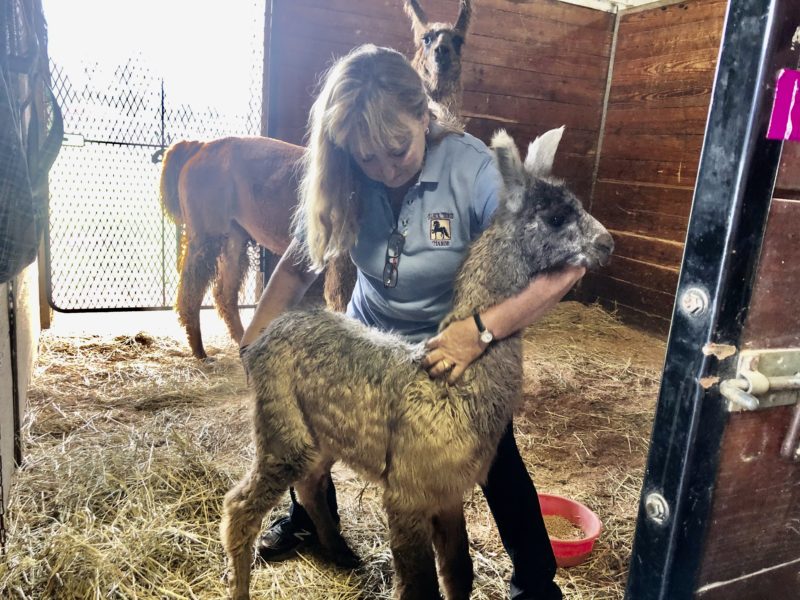 Soon after, we left Black Horse Manor and talked about when we would go back. Jannie told us that on some tours, if the visitors want, she halters the alpacas and kids can lead them through an obstacle course. That’s what we want to do on our next visit. See information below about booking a farm tour near Louisville at Black Horse Manor. 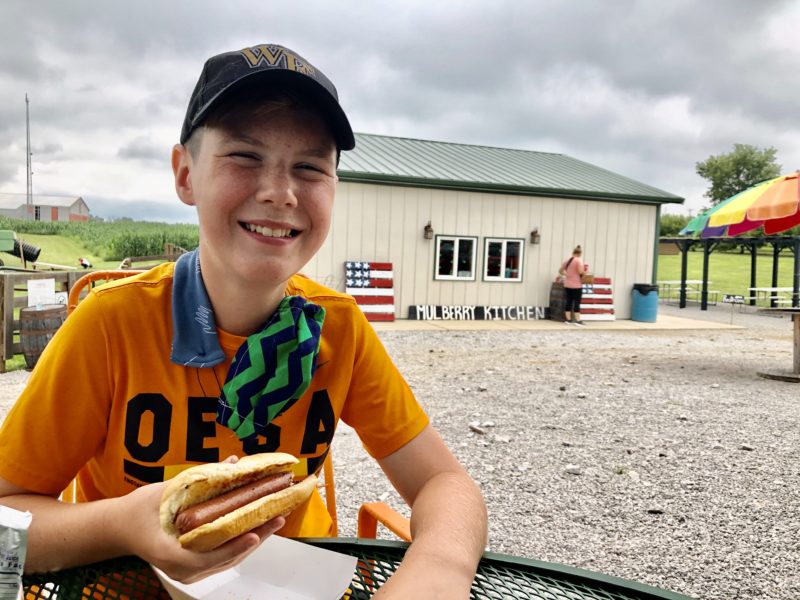 After our Black Horse Manor farm tour near Louisville, we went a mile down the road to Mulberry Orchard. How amazing is it that they are so close! Just one mile. We ordered lunch, which was delicious. Then, the kids played in the outdoor area for quite some time. Together, we all went through the corn maze (and cheated to get out). 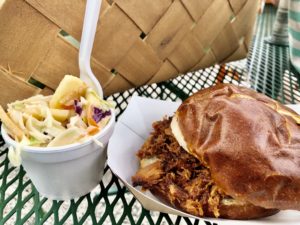 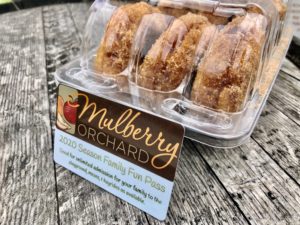 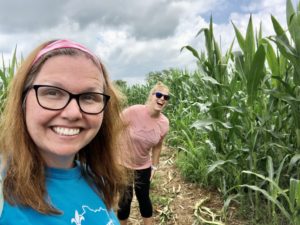 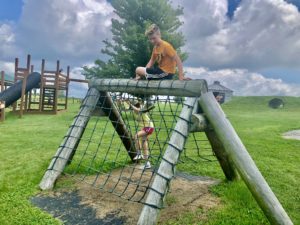 It was $25 to get a season pass for the family to the play area. Since I plan to go back a few times, especially in the fall, we went ahead and got the pass. Otherwise, you can pay $10 for a family pass that last through the rest of the summer.

Finally, I grabbed some apple cider donuts from the farm store to take home for the next day. Who am I kidding, I ate one in the car on the ride home. See below for information about a FREE SLUSHIE from Mulberry Orchard!

We spent about 5 hours out of the house, in open spaces on farms, and had a fantastic day. You can arrange this fun for your family also. Here’s information about booking a farm tour near Louisville at Black Horse Manor.

HAVE FUN with animal encounters near Louisville! 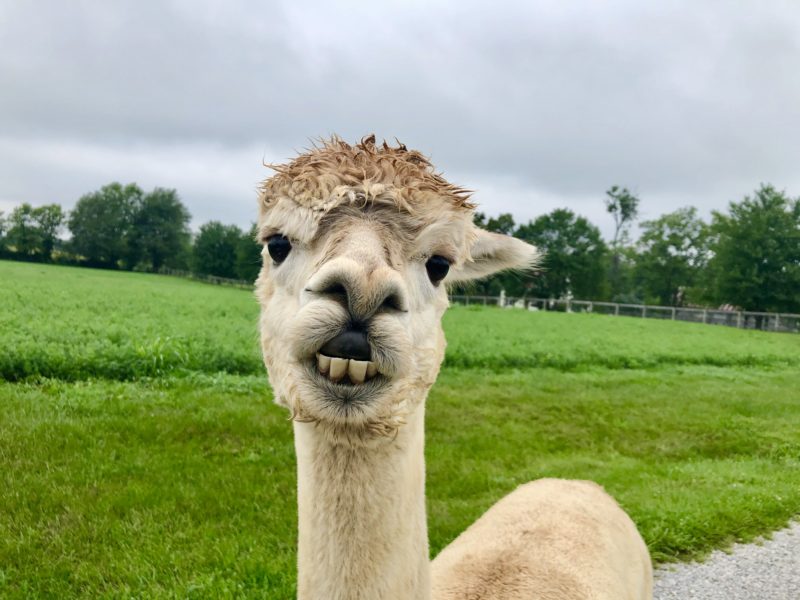